Leather – To Reuse or to Refuse?

Eco Dogs and Cats is a vegan owned and operated company. We believe in compassion for all sentient beings. We know it’s unnecessary to exploit, to inflict suffering, and to take the lives of others for our benefit. We have the privilege of having access to grains, fruits, vegetables, and the wonderful bonus of vegan alternative products. We have the option to buy products not tested on animals (toiletries, makeup, household cleaning supplies, etc.), to wear clothing that isn’t made of animal body parts (fur, leather, down, wool, etc.), and to choose entertainment that doesn’t harm and exploit animals (like zoos, aquariums, marine parks like Sea World, circuses, etc.)

But when making the transition, should we throw away our old leather shoes? Should we toss out our wool sweater? Trash our soap that contains someone’s body parts and thats chemical ingredients were forced into the sensitive eyes of innocent rabbits or beagle puppies? Is vintage fur okay, because the animal has already been electrocuted, or drowned, or skinned alive?

After all, valuable resources went into producing products of these animal’s suffering. In the leather industry, many humans suffer by being put in poor working conditions and having to work with toxins to keep the cow’s skin from rotting away. The cows suffered immensely before their untimely death and all that is to show for it is their skin, fashioned into something functional and trendy. Is it wrong for us to just dump that into a landfill?

If we wore a dead human’s skin, even skin of someone who died peacefully of natural causes instead of being murdered, we would be called sociopaths. There may even be legal consequences. It would be absolutely outrageous! So why are the bodies of nonhuman animals any different? Because we do not see their deaths as equal to ours? Because they do not speak? Because we are so used to seeing their body parts exploited and turned into “things”?

Take a minute to imagine that these “products” were made up of the dog, cat and/or other nonhuman animal that you share your home with. Imagine their bodies were stolen and abused, that they cried out in fear and pain, that they suffered in death, and then someone turned them into some”thing” utilitarian. Personally, my heart would be broken. I would want my cat and dog, Bella and Sebastian, to be treated respectfully in death. I would want to bury them and I would mourn the loss of their lives because they are part of my family and their lives matter.

When I somehow find in my possession a “product” that was once part of an animal’s body, or a product that an animal suffered for, I do not consume or use it. Not because I believe in keeping myself pure, but because it’s feels disrespectful and wrong for me to participate in oppression and exploitation, and to use what is not mine to use.

This civilization is built on the exploitation of nonhuman animals and none of us can be perfect, but should we not try to grow and at least think about the statements we are making and the actions we are supporting? If we are privileged enough to afford new shoes that are not made of someone else’s skin, and are provided the education that the skin is a result of someone’s suffering and someone’s loss of life, should we not buy new shoes? And if we are privileged enough to have access to shoes that were made without exploiting humans, should we not make an effort to buy those?

We can all keep taking steps until we reach a point where we are doing everything that we are able to do to cause the least amount of suffering, exploitation and oppression in this civilization built on suffering, exploitation and oppression. As compassionate individuals, let’s all make efforts to keep growing, questioning unjust societal norms, and fighting for equality and an end to oppression of all peoples and all nonhuman animals. We can start by looking inwardly and see what actions we need to take to gain integrity with our compassionate intentions. Cleaning out the closet can be the bridge to our road of respect and equality for all! 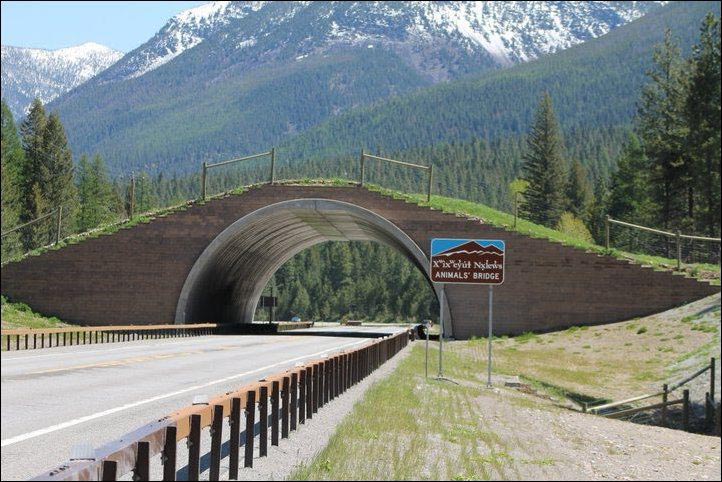 Wildlife overpass on the Flathead Indian Reservation in Montana, USA. Image via The World Geography.